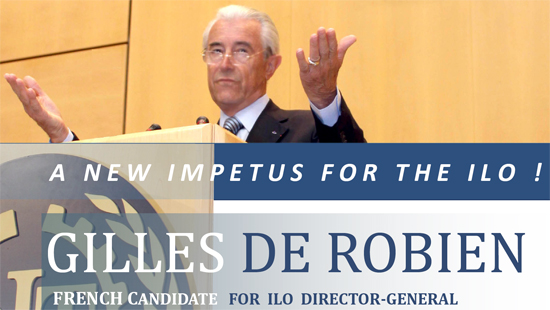 Faced with the new challenges of globalization, I am aware of the particular responsibility of the Director- General to obtain and consolidate the confidence of States and social partners, but also to represent the ILO and share its message. I am ready for that responsibility.

In the course of my professional, parliamentary, governmental and diplomatic career, I have acquired the necessary experience. I will put this passion for social dialogue to the service of the ILO, where cooperation between the three constituent groups is vital for progress. I am committed.

I want to honour the ILO members and take inspiration from the men and women who have worked to share its values since 1919. I count on you, all of you, government officials, employers, workers of the world, for your support, so that together, we can give…

Mr Gilles de Robien, Ambassador for Social Cohesion and former Cabinet Minister, candidate of France for the position of Director-General of the International Labour Organization (ILO), will be on a two-day visit to Canada on 23-24 April 2012.

Mr. de Robien is leading an ambitious project for the International Labor Organization (ILO), to which he intends to devote all his experience, gained during his professional life and parliamentary, governmental and diplomatic roles. Tasked by President Sarkozy with coordinating the social component of the G20 under French presidency, he initiated and coordinated the first Meeting of G20 Labor and Employment Ministers, and his action made possible the adoption by the Heads of State and Government of conclusions crucial to promoting the social dimension of globalization.

Mr. de Robien has been the Government Delegate to the ILO Governing Body for 5 years and chaired its General Conference in June 2010; he is therefore well acquainted with the ILO. The government is convinced that he will be able to provide this organization – which is unique by virtue of its tripartite structure – new impetus in order to respond to the economic and social challenges of our time: an ILO that will promote the social dimension of globalization; an ILO with crucial expertise on the international stage; a well-managed ILO that that has complete transparency; an ILO that is refocusing its attention on its normative priorities; a modern and open ILO that serves its tripartite constituents.

The government fully supports Mr. de Robien’s proactive and realistic project and supports the active campaign that he’s conducting among the members of an organization to which our country attaches particular importance. Like the other 8 candidates that are running, Mr. de Robien was heard by the ILO Governing Body on March 30, before continuing his campaign which will involve visits to all members of the ILO Governing Body between now and the election of the Director-General.

To know more about the ILO