The President of the Republic meets with Stephen Harper [fr]

The President of the Republic met with Canadian Prime Minister Stephen Harper, on June 7, 2012. These discussions followed their first meeting, which took place at the G8 Summit at Camp David on May 18 and 19, 2012.

They discussed the top concerns in bilateral relations between France and Canada, particularly economic issues, as well as the negotiations currently underway between the European Union and Canada. They welcomed the particularly positive momentum in cultural, academic and scientific cooperation and agreed to intensify bilateral policy dialogue on major international issues.

The President of the Republic and the Prime Minister also spoke of the preparations for the upcoming G20 Summit in Los Cabos (June 18-19) and the United Nations Conference on Sustainable Development, Rio+20 (June 20-22). The President stressed the need to make concrete decisions at these meetings in order to not suffer from globalization and to put real regulation in place. 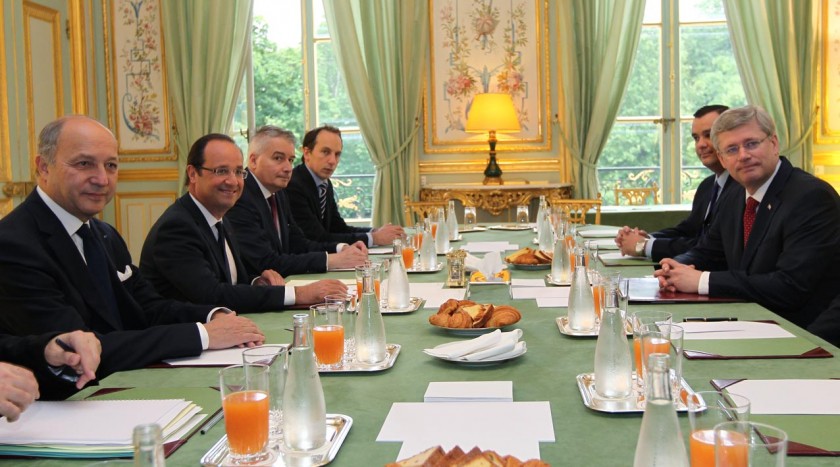 The two leaders also discussed the major issues in international affairs where France and Canada are working in close cooperation, in particular Syria, Mali and Iran. They expressed their shared concern regarding the seriousness of the situation in Syria and the necessity for the international community to support the mission of Kofi Annan, the joint UN-Arab League Special Envoy. François Hollande pointed out that France was actively preparing the next meeting of the Friends of Syria group in Paris.

The two leaders shared the same view on the situation in the Sahel region, particularly in Mali, and reaffirmed the support of France and Canada for the mediation efforts by the Economic Community Of West African States (ECOWAS) and for its efforts in seeing a full return to democracy in Mali, to safeguard its unity and territorial integrity and to fight terrorism in all its forms. The President of the Republic stated that France will continue to work with the African Union and its European and international partners to support the commitment of ECOWAS in Mali and the Sahel.

Prime Minister Harper’s visit was a chance to reaffirm the trust that characterizes the Franco-Canadian partnership.