Home > The Embassy > News in Canada > Archives > Events archives > 2009 > The Gendarmerie holds a celebration for the Saint Genevieve in (...)

The Gendarmerie holds a celebration for the Saint Genevieve in Canada

The Gendarmerie holds a celebration for the Saint Genevieve in Canada

On Friday, January 16, 2009, the Embassy of France in Ottawa held a celebration for Saint Genevieve, the patron saint of police officers. In honour of this celebration, approximately fifty senior police officers and authorities from the law enforcement community were present. 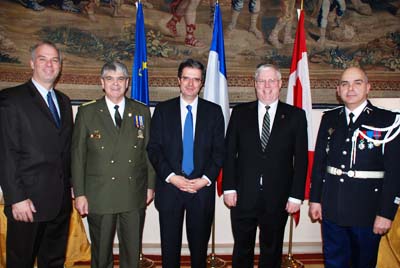 During his speech, His Excellency François Delattre, Ambassador of France in Canada, specifically expressed his gratitude to William Elliott, Commissioner of the Royal Canadian Mounted Police (RCMP), Richard Deschesnes, Director General of the Sûreté du Québec, Yvan Delorme, Director of the Service de police de la Ville de Montréal, Mario Harel, Director of the Gatineau Police Force and Valérie Sagant, Director General of the International Centre for the Prevention of Crime. The Ambassador also thanked the entire Canadian policing community for ensuring the safety of us all.

The Ambassador continued his speech by relating Saint Genevieve’s story as protector of the city of Paris from attacks by the Huns and the Francs in 451 and 470. This short history lesson underlined the homeland security reforms implemented by the French government and included the keywords “coordination” and “anticipation”. His Excellency also gave an overview of the French Presidency of the European Union, which played an important part in strengthening Europol’s role and its partnership with Interpol.

In conclusion, the Ambassador’s speech emphasized the Franco-Canadian and Franco-Quebec partnership, which he defined as “exemplary, dynamic and extremely diversified”. The year 2008 was marked by several official visits: RCMP Commissioner, William Elliott, to Paris and the Director General of the National Police to Ottawa and Quebec. These visits attest the great extent of this collaboration, which continues to grow and develop within Francopol, a French-speaking network for police officers, which assembles effective methods and expertise from experienced police officers.

The Ambassador expressed how important the France-Canada relations are for these two countries; President Sarkozy has shown, and continues to show, strong support for these relations. He thanked the Philippe Guimbert, Colonel of the gendarmerie, homeland security attaché, for his loyal service. The Colonel has played a major role in developing a partnership between French and Canadian police officers.

The Ambassador’s speech (in French only)