Home > The Embassy > News in Canada > Archives > 2012 : events in Canada > The Arctic Council: Its place in the Future of Arctic Governance

The Arctic Council: Its place in the Future of Arctic Governance

The Walter & Duncan Gordon Foundation and the University of Toronto’s Munk School of Global Affairs hosted a conference on January 17-18, 2012, entitled, The Arctic Council: Its place in the Future of Arctic Governance. 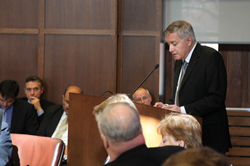 Ambassador Philippe ZELLER was invited to participate and present the views of France, which has been an Observer on the Arctic Council since 2000. France considers the Arctic Council to be a unique forum that, since its creation in 1996, has allowed for strengthened dialogue and cooperation between Arctic States and representatives of Indigenous communities on the future of the region and the wellbeing of communities.

France is very present in the Arctic and has cooperated with Arctic States for many years on scientific, academic and economic issues. The nomination in March 2009 by the President of the Republic, Nicolas SARKOZY, of Michel ROCARD, former Prime Minister and noted specialist on polar issues, illustrates our commitment to strengthening our dialogue with Member States and Permanent Participants on the Arctic Council.

The region is currently faced with new challenges that cannot be overcome without increased cooperation between Arctic States and responsible operators in the region. This was the message that Ambassador Philippe ZELLER delivered to participants at the conference.