The A400M is a multipurpose military transport aircraft that will replace the French air force’s fleet of Transall C-160s. 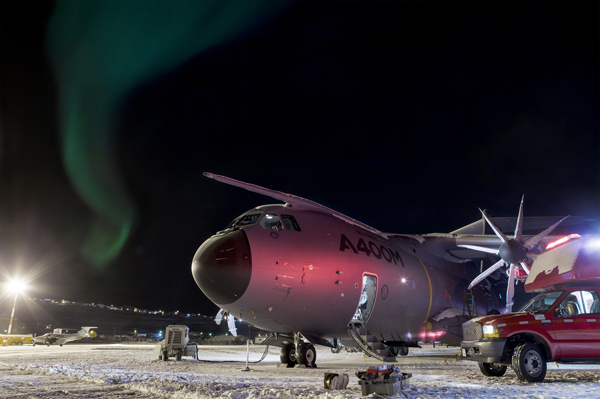 The A400M program was cooperatively developed between seven European member countries of NATO: Germany, France, Spain, Great Britain, Turkey, Belgium, and Luxembourg. These countries have ordered 180 aircraft through this program.

The Organisation for Joint Armament Cooperation (OCCAR) is acting as project manager for this program. The A400M development and production schedule is being overseen by Airbus Military.

As the countdown to first customer delivery progresses, the Airbus Military A400M new generation airlifter has successfully passed a renewed series of cold weather tests in a production-representative configuration.

During a week-long deployment to Iqaluit, Canada, the flight test-team demonstrated the capability of equipment such as the cargo system and production-standard engines which were not available during earlier tests in Sweden.

Tests conducted over 5 days on Grizzly 5 / msn6 included engine runs after a 24-hour cold-soak to -32°C, use of all the cargo bay equipment, taxying, and a development flight.