Dominique Strauss-Kahn, selected to take over as head of the IMF in November, says that he will press ahead with reform of the 185-member international institution that helps oversee the global economy. It needs to adapt to be relevant, he tells a Paris press conference. 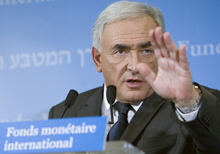 Statement by Mr. Dominique Strauss-Kahn on His Selection as Managing Director of the IMFPress Release No. 07/213September 28, 2007

Mr. Dominique Strauss-Kahn issued the following statement today after the Executive Board of the International Monetary Fund (IMF) selected him as the next IMF Managing Director:

"The Executive Board of the International Monetary Fund has just chosen me to succeed Rodrigo de Rato as Managing Director.

"This is for me a joy, honor, and responsibility. I want to thank Jean-Claude Juncker, thanks to whom all of this started; Nicolas Sarkozy, who supported my candidacy strongly in France’s name; the Ministers of the European Union who trusted me, and more broadly all of those who voiced their support.

"Given the strong legitimacy derived from the very broad support I received, notably from emerging market and low-income countries, I am determined to pursue without delay the reforms needed for the IMF to make financial stability serve the international community, while fostering growth and employment."