Presentation of Credentials at the Citadelle in Québec

Her Excellency the Right Honourable Michaëlle Jean, Governor General of Canada, received the credentials of Mr. François Delattre, Ambassador-designate of the French Republic, in Québec City, on Thursday, June 26, 2008. 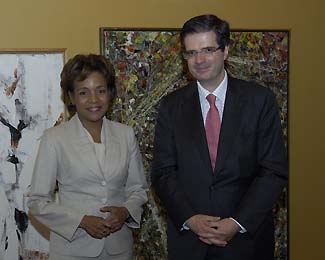 Speech on the Occasion of the Presentation of Credentials (Gabon, Cameroon, Federal Republic of Nigeria and French Republic)

It is unusual for the presentation of credentials to take place here, at the Citadelle of Québec, the governor general’s second official residence.

I am pleased to welcome you here this morning, particularly because this year, we are celebrating the 400th anniversary of the founding of the beautiful City of Québec.

High atop Cape Diamant, where the majestic St. Lawrence River narrows—which is the original Indian meaning of the word Quebec—the Citadelle is the only military fortification in North America that remains intact.

It is the jewel of the old City of Québec, which has been designated a UNESCO World Heritage Site.

Some very significant pages of our country’s history were written within these walls, and I hope that you will make the most of your stay to discover this fortification and the charms of a magnificent city, where Europe and the Americas meet.

It was rather timely that we should hold this ceremony here, in the City of Québec, as the festivities are just getting underway, because three of the countries represented here today—France, Gabon and Cameroon—share with Quebec and Canada the French language and culture, a heritage of which we are extremely proud.

Therefore, the 400th anniversary of the founding of the City of Québec has given us the opportunity to highlight 400 years of French presence in the Americas.

Four hundred years of determination, of setting down roots and of growth, marked by the meeting of people, civilizations, cultures and languages that history has brought together.

And we are continuing that tradition of meeting here today.

This past May, I undertook an official visit to France as an extension of the 400th anniversary. It was a unique opportunity to celebrate the history that Canada and France share and the strength of the bonds between us, on both sides of the Atlantic.

We are looking forward to welcoming the Prime Minister of France, François Fillon, in just a few days.

Ambassador Delattre, I would like to acknowledge the active role that your predecessor, Mr. Jouanneau, played in strengthening the friendship that binds our two countries.

And I can assure you that I have no doubt that you will give new momentum to the relationships between our countries. I offer you my best wishes for success.

It will also be Canada’s great pleasure to host delegations from France, Gabon and Cameroon at the Sommet de la Francophonie, which will be held here, in the City of Québec, in October.

Dialogue, partnership and fellowship mark the cornerstones of the spirit in which member and observer countries of La Francophonie will move forward together to achieve their common objectives.

I am especially pleased to welcome this morning three African countries with which Canada has had a long relationship.

In 2006, I visited the heart of Africa, a continent whose history is tied to my own and is embedded in my deepest memories.

Hand in hand, Canada and Africa have made this journey together and on my State visits, I was so delighted to see the successes and promise of this long standing partnership in human diplomacy.

And I saw that all of Africa’s hidden promises—and there are a great many—are embodied in the actions of the women and men whom I met.

Women and men from all walks of life, civilians and decision makers who are responding to the challenges their societies are facing with courage, conviction and dignity.

Such is the case of the people of Gabon, Cameroon and Nigeria, three countries that embody the rich diversity of Africa, represented by you, their spokespeople in Canada.

In particular, I would like to commend the leadership demonstrated by Nigeria in its efforts to ensure security in that area, particularly in Darfur.

We are grateful for your country’s contribution to the peace missions. And it was with great sadness that we learned of the deaths of several of your soldiers as they were returning from Darfur.

You know, in my travels across Canada and abroad, I have come to realize that our greatest responsibility is to focus on the values we share, rather than on borders that separate us.

The horizons of our lives, long limited to our own village, region or country, have now expanded to global proportions, and call for greater solidarity and more co‑operation.

I invite you to consider this today. And I encourage you to create new opportunities for coming together and partnership.

You can henceforth count on the friendship and support of Canadians in this regard.

I urge you to take this opportunity to meet with them. You will find that they are open and share your hopes for peace, freedom and prosperity.

You will discover that Canada contains the world and that we Canadians treasure our diversity, for it brings us unlimited possibilities.

You will see that the rule of law, respect for human dignity, equality between women and men, freedom of speech and the responsibility to act, good governance, and sustainable development are values that we are committed to promoting, here at home and around the world, and that they are part and parcel of what our citizenship means to us and the role we want to play in the world.

Continuing our dialogue, strengthening our ties and working together toward a common goal: this is what we should focus on throughout your mandate, strong in the friendship that binds us.

I believe profoundly in diplomacy at the human level. And so, to friendship, to sharing, and to solidarity!