Today, seventeen Second World War veterans residing at Ste. Anne’s Hospital received the French Legion of Honour from His Excellency Philippe Zeller, Ambassador of France to Canada, who was accompanied by the Honourable Walt Natynczyk, Deputy Minister of Veteran’s Affairs.

This prestigious award is an expression of France’s wish to honour the heroes who helped liberate the country during the Second World War, particularly this year, which marks the 70th anniversary of D-Day and of the Battle of Normandy.

Mr. Zeller went on to say: “The whole of France is grateful toward these brave veterans who, 70 years ago, fought on the beaches of Normandy, Provence or in the skies of France. These men are the last of the young heroes who put their lives on hold to fight a ruthless war against barbarism and Nazism.” 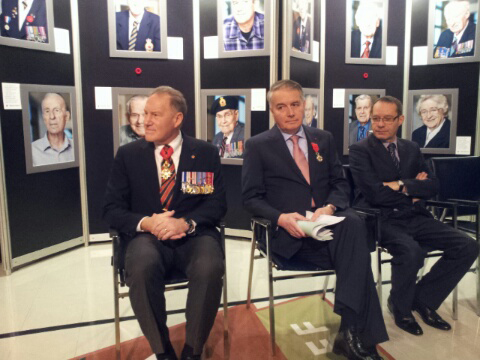 France’s Legion of Honour was created by Napoleon Bonaparte in 1802. It rewards citizens for their merits, irrespective of social or hereditary considerations. The Knight of the French Legion of Honour medal is a five-armed cross with a V-shaped cut-out at the end of each arm, generally surmounted by a wreath of laurel leaves.