Home > The Embassy > News in Canada > Archives > 2016: Events in Canada > #LOreal Canada reiterates its commitment to women in science

#LOreal Canada reiterates its commitment to women in science 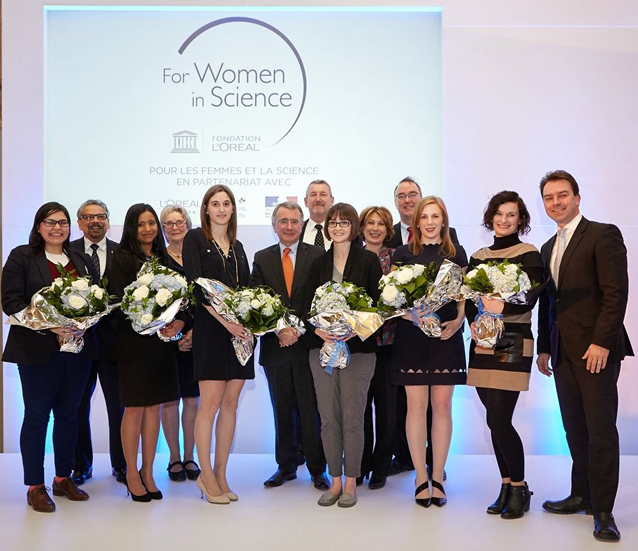 MONTREAL, January 21, 2016 – At a ceremony held on January 21 at the French embassy in Ottawa, seven Canadian women researchers were awarded top honors under the L’Oréal Canada For Women in Science Program with the support of the Canadian Commission for UNESCO. The partners also took the opportunity to launch L’Oréal Canada For Girls in Science, an initiative to encourage high school girls to pursue careers in science.

Created in 1998 by L’Oréal and UNESCO, For Women in Science is now among the most prestigious programs of its kind. Since its inception, more than 2,250 scientists from over 110 countries have benefited from the program. In addition, national programs have been created in some sixty countries, including L’Oréal Canada For Women in Science in 2003 with the support of the Canadian Commission for UNESCO. Thanks to the program, fellowships have been awarded to nearly 50 exceptional women scientists.

“The 2015 winners of the L’Oréal Canada For Women in Science Program fellowship embody the values of excellence, hard work, and innovation we want to encourage and support, in cooperation with the Canadian Commission for UNESCO,” said Frank Kollmar, President & CEO, L’Oréal Canada. “They are clear proof of the important role of Canadian women scientists, whose exceptional work contributes to the advancement of science and knowledge.”

L’Oréal Canada took advantage of the ceremony to reiterate its commitment to promoting careers in science for women by putting in place a one-of-a-kind program for high school students. Called L’Oréal Canada For Girls in Science, this joint initiative with the Canadian Commission for UNESCO and Youth Science Canada marks a new level of involvement for the company.

In spring 2016, girls and boys at UNESCO network schools will take part in interactive workshops designed to make careers in science more attractive while breaking down the persistent stereotypes regarding women in the sciences.

To this end, L’Oréal-UNESCO For Women in Science fellowship winners and women scientists at L’Oréal Canada will participate as mentors.

“It is both a great honor and a great responsibility to be a role model for these teens,” said Katherine Farrajota, Manager, Drug Regulatory Affairs, L’Oréal Canada. “Working in the sciences ourselves, we’re well aware of the need to attract more women to these professions. The L’Oréal Canada For Girls in Science Program is therefore a great opportunity to reach girls right when they’re thinking about their professional future.” The fellowship winners will take part in creating Web capsules for girls age 15 to 18 to provide information and support them in their decision-making process.

The 2015 L’Oréal-UNESCO Excellence in Research fellowships, worth $20,000 each, are aimed at supporting major projects carried out by Canadian women conducting postdoctoral research. They reward excellence and allow seasoned scientists, selected by a jury of experts, to continue their work. Christina Cameron, President of the Canadian Commission for UNESCO, had the pleasure of awarding the fellowships to:

As part of the mission of the France-Canada Research Fund (FCRF), $5,000 fellowship are awarded to encourage and develop scientific and academic exchanges between France and Canada in all fields of knowledge, from the pure sciences to the humanities and social sciences. The 2015 L’Oréal Canada France-Canada Research Fund fellowship recipients are:

In addition, the $5,000, 2015 L’Oréal-UNESCO For Women in Science – NSERC Postdoctoral Fellowship Supplement, which goes to a Canadian scientist participating in a promising research project, was awarded to:

L’Oréal Canada also honored two Canadian women scientists through the international For Women in Science Program for their noteworthy achievements. Professor Molly S. Shoichet of the University of Toronto was selected by an independent international jury as one of five global laureates (representing North America) for her work in polymer chemistry. In addition, postdoctoral fellow Vanessa D’Costa of the University of Toronto took home one of fifteen fellowships awarded to young talent.

L’Oréal Canada is a wholly-owned subsidiary of L’Oréal Group, the largest cosmetics company in the world. Headquartered in Montreal, L’Oréal Canada had sales of $1.070 billion in 2014 and employs more than 1,200 people. The company holds a portfolio of 35 brands, encompassing all aspects of beauty, and is present across all distribution networks: mass market, department stores, salons, pharmacies, drugstores, and branded retail.

The Canadian Commission for UNESCO connects Canadians with the work of UNESCO. Its aim is to create a society in which Canadians share knowledge and learn from each other, locally and globally, in order to build peaceful, equitable and sustainable futures. The Commission operates within the Canada Council for the Arts.