L’Oréal-Unesco awards "for Women and Science" 2011

This year is the 9th Ceremony of the L’Oréal Canada “For Women in Science Program with the support of the Canadian Commission for UNESCO’’. L’Oréal Canada annually awards fellowships to four exceptional Canadian researchers.

In addition to the four L’Oréal Canada winners, this reception was an occasion to announce L’Oréal’s participation in the France Canada Research Fund. The first L’Oréal-FCRF scholarship was awarded to Courtney Calahoo, a doctoral candidate at Dalhousie University. 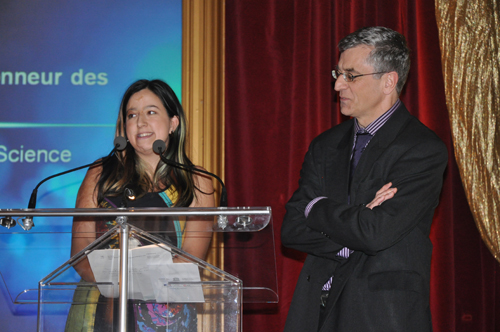 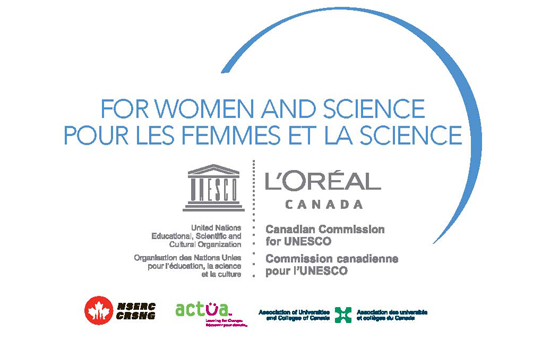 Nagissa Mahmoudi is a PhD candidate in the School of Geography and Earth Sciences at McMaster University. Her research focuses on the bioremediation of organic contaminants in the environment. Specifically, she studies microorganisms that are capable of degrading petroleum-derived pollutants. Originally from Toronto, Nagissa completed her Bachelors of Science at the University of Toronto in 2008 where she specialized in Integrative Biology. She has received numerous scholarships and awards including the prestigious Alexander Graham Bell Canada Graduate Scholarship and a Michael Smith Foreign Study Supplement.

Jessica is originally from Burlington, Ontario. She completed her undergraduate degree at Queen’s University in Kingston, Ontario. She was a Life Sciences major, with a focus in Neurophysiology. During her undergrad, she was a team member and captain of the women’s varsity basketball team. Her athletic pursuits ultimately influenced her academic path—she chose to continue on at Queen’s and study human movement in a Biomechanics lab through the School of Kinesiology and Health Studies. In September 2010 she began her PhD in the Locomotion Lab (Department of Biomedical Physiology and Kinesiology).

Kristin is originally from Surrey, British Columbia. She traces her first interest and love of astronomy to catching a view of Halley’s Comet when she was 8 years old through a large telescope at the Vancouver Planetarium with her parents. She received her undergraduate degree in Physics & Astronomy from the University of Victoria in 2000. She completed her MSc. (2003) and Ph.D. (2006) in Astronomy at the University of British Columbia. She was offered a postdoctoral research position at Durham University in the North of England, where she was awarded a prestigious UK Science and Technology Facilities Council fellowship shortly after her arrival.

Bonnie O. Leung is a post-doctoral fellow in the Department of Chemistry at the University of British Columbia. She is a native Calgarian and graduated with a B.Sc. in Applied Chemistry and M.Sc. in Inorganic Chemistry from the University of Calgary before completing a Ph.D in Chemical Biology at McMaster University. Her research interests are centered on using novel surface sensitive detection techniques to study model biological interactions at interfaces. In particular, she is interested in understanding how biocompatible materials may improve currently existing implants in the human body.

For more information L’Oréal "For Women and Science"