Over the course of the ten years since the inception of this program, 52 Laureates have been honored and 120 research fellowships have been granted on an international scale.

Since the 2003 launch of the program in Canada, L’Oréal awarded close to 20 grants with the collaboration of the Canadian Commission for UNESCO to Canadian women scientists, recognizing and supporting the excellence of Canadian research.

This year’s Canadian award ceremony took place in the elegant Grand Salon of the Embassy of France on Sussex Drive on Nov. 5th, 2009, under the high patronage and presence of His Excellency François Delattre, Ambassador of France in Canada and the President and Chief Executive Officer of L’Oréal Canada, Mr. Javier San Juan. 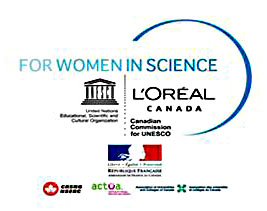 The Guest of Honour at this year’s ceremony was the first International Fellow to hail from Canada Professor Eugenia Kumacheva from the Department of Chemistry of the University of Toronto,. Professor Kumacheva is the For Women In Science International Laureate for 2009 for North America for her work in the design and development of new materials with many applications, including targeted drug delivery for cancer treatments and materials for high density optical data storage.

2009 Fellows:
Five Laureates from the Four Corners of the Country

The excellence fellowships aim to support major research projects carried out by women in Canada at a post-doctorate level. The objective of these grants is to recognize excellence and enable exceptional Canadian scientific women – selected by a jury of experts – to pursue and expand their research project. The 2009 excellence fellowships specifically applied to candidates in Life Sciences, and are awarded as follows:

Jennifer McKelvie is a postdoctoral student from the University of Toronto, majoring in Environment Geochemistry.

The mentoring fellowships are designed for talented scientists at a doctorate level, enabling them to pursue their research project. These laureates also participate in the Actua mentoring program, where they share their experience and passion for science with 6 to 17 year old girls at summer camp and during specific workshops or clubs. The 2009 mentoring grants are allocated to:

Sarah Wilson is a PHD student from McGill University majoring in the Evolution of Ecology (Plant Science/Geography).

Janice Ting is a PhD student from the University of Toronto, Department of Ecology and Evolutionary Biology.