Her Excellency the Right Honourable Michaëlle Jean visit to France

From May 6–10, France welcomed Governor-General of Canada, Michaelle Jean, during her official visit. 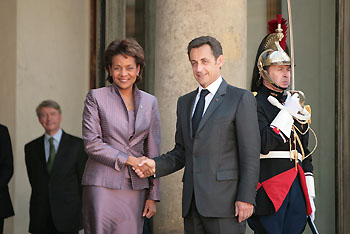 This visit is the most significant trip made to France, by a Canadian public figure, for events celebrating the 400th anniversary of the founding of Québec City. It demonstrates the friendship that unites our two countries and peoples. 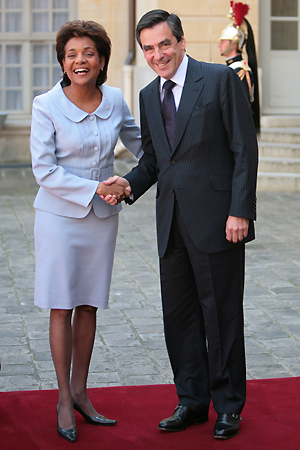 On Tuesday, May 6th, the Governor General met with the Prime Minister. On May 7th, she met with the President of the Republic and the Speakers of the Senate and National Assembly.

On May 8th, Governor General Michaëlle Jean took part in a ceremony at Ouistreham commemorating the 63rd anniversary of the Armistice, followed by a tribute to Canadian soldiers buried at the Bény sur Mer Canadian War Cemetery.

The Right Honourable Michaëlle Jean attended the 400th anniversary events at La Rochelle. Along with Mrs. Christine Albanel, Minister of Culture and Communication, the Governor General bided farewell to crews setting sail across the Atlantic Ocean, accepted the Grand Livre de Champlain, and took part in the inauguration of an interpretation centre on New France.

Their Excellencies went to Bordeaux, where Governor General Michaëlle Jean met with the Mayor of Bordeaux, Alain Juppé, for a discussion on cross-cultures.