After more than four centuries of shared history and 90 years of diplomatic relations between France and Canada, the large French community, often binational, but also Canadians, Francophones and Francophiles, have no place to celebrate their history, act on the present and prepare for the future. In order to fill this gap, MM. Christophe Raisonnier and André Levesque, volunteers very committed to the duty of memory, launched the project to build the first national monument dedicated to the friendship between France and Canada. 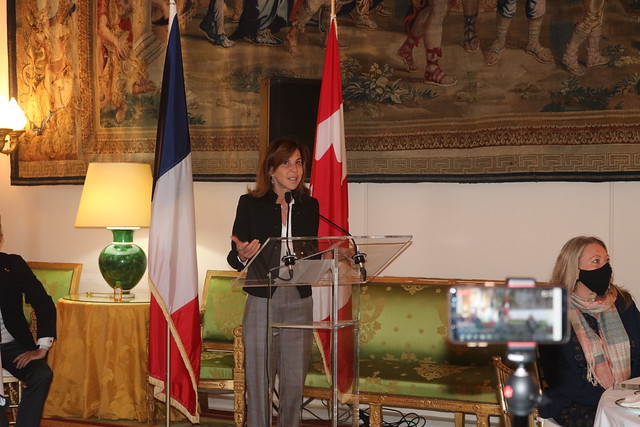 The first Franco-Canadian international monument, the Amicitia France-Canada monument is intended to highlight the contributions and sacrifices made by our elders and to promote contemporary actions between France and Canada. Located on the “Inspired Hill” of Beechwood, an exceptional historic site of the National Cemetery of Canada, the monument will be strategically built near the National Military Cemetery, due to the military links between the Canadian and French Forces since the First World War.

Supported by the French Embassy in Canada, under the honorary co-presidency of the Vice-President of the French Senate, Hélène Conway-Mouret and Canadian Senator Serge Joyal, this project is today carried by the association " Monument Amicitia France-Canada” and the Beechwood Foundation of the National Cemetery of Canada. The Beechwood Foundation has agreed to donate a parcel of wooded land free of charge that will house the monument.

The ceremony which took place at the French Embassy aimed to officially launch the fundraising campaign for the Amicitia monument, in presence of French and Canadian civil and military officials. This virtual ceremony took place in accordance with COVID-19 regulations and restrictions and is available on the Facebook account of the French Embassy in Canada.