France took up its G7 Presidency in 2019 with the key theme of combating inequality. It is organizing several ministerial meetings as well as the G7 Summit which will bring together the Heads of State and Government from the seven countries in Biarritz from 24 to 26 August 2019.

In addition to addressing the economic issues it focused on initially, the G7 is now a forum for concertation where common responses are found for major global challenges including peace and security, counter-terrorism, development, education, health, the environment and climate change.

In 2019, in order to reduce inequality of opportunity and give everyone the same chances in life, regardless of where they were born, where they live, or their gender, and to ensure global stability and peace, France has set a number of goals and priorities for its G7 Presidency:

This G7 will not just be a meeting between the governments of the seven countries but rather an opportunity to work more broadly with everyone who shares our values and is willing to take action to move forward together.

Therefore other countries will be invited to take part in the debates and negotiations at Head of State and Government level, as well as in preparatory meetings throughout the year. Particular emphasis will be placed on a number of African countries, as Africa is a special partner and a key centre for development challenges, but also for opportunities to build future equality.

Working hand in hand with international organizations is also a priority of the G7 Presidency and it will seek to enhance synergies with and among them.

A year of dialogue 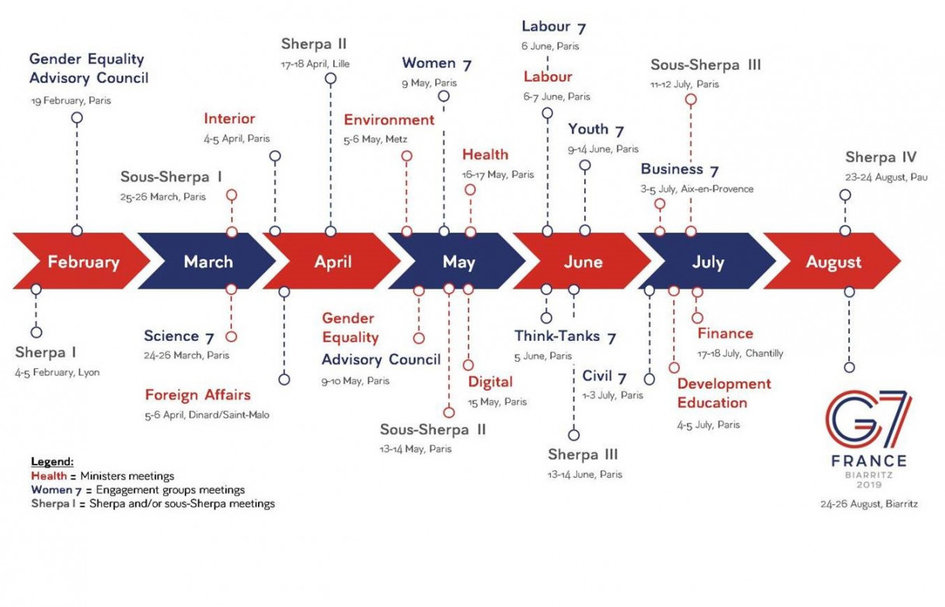 Throughout 2019, ministerial-level meetings will be held in preparation for the Heads of State and Government Summit in Biarritz at the end of August: