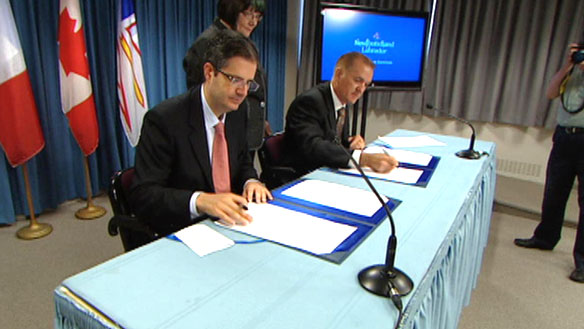 Friday, July 2, 2010 : Newfoundland and Labrador signed a deal Friday with the French government to recognize each other’s driver’s licences.

The deal will allow French citizens — including those in tiny islands of St-Pierre-Miquelon, just south of Newfoundland — to exchange their licence for a new one in Newfoundland and Labrador without having to be retested.

The same offer applies to residents of Newfoundland and Labrador who relocate to France.

Francois Delattre, France’s ambassador to Canada, said the agreement cuts through a lot of red tape.

"Today we are the second largest foreign investor in Canada, supporting more than 80,000 Canadian jobs in this country, and we think we can do better," Delattre told reporters in St. John’s.

"I think the agreement signed today is a good way to do that."

Delattre said the agreement will ease the lives of people from St.-Pierre-Miquelon when they come to work or study in Newfoundland and Labrador, as well as the rest of Canada.

The Charter (The Charter is the community voice of Placentia, Argentia and the Cape Shore region. This area is poised for major industrial and economic development with the promise of a nickel smelting project to be located in nearby Long Harbour).

Residents of the Republic of France, including St. Pierre and Miquelon, who come to Newfoundland and Labrador to live, study or work will now have their drivers’ licence recognized. The agreement also allows the same for Newfoundlanders and Labradorians living in France.

“Agreements such as this provide an easier transition for anyone immigrating or doing business. It makes the burden of moving to a new location less daunting,” said the Honourable Kevin O’Brien, Minister of Government Services.

"The signature of the agreement on driver’s licence exchange is a major step that is highly desirable for the development of relations between Newfoundland and Labrador and France,” said His Excellency, François Delattre, Ambassador of France in Canada. “It will ease the life of our citizens on both sides of the Atlantic, including St. Pierre and Miquelon."

The Highway Traffic Act allows for this type of reciprocal agreement with other jurisdictions. It exempts requirements for personal vehicles and motorcycles for written, vision and road test requirements and essentially allows for an exchange of these driver’s licences.

The province has previously entered into similar agreements with the United States, United Kingdom, Germany, Austria, Switzerland and South Korea.