North Korea’s continued development of weapons of mass destruction, including nuclear weapons and ballistic missiles, has been a threat to regional and global security since the turn of the 21st century. This threat is both direct, as the range of certain North Korean missiles would allow them to strike Europe, and indirect, as North Korea transfers its items and technologies to other States. The development of these weapons of mass destruction programmes is a violation of the international non-proliferation regime, of which the Nuclear Non-Proliferation Treaty (NPT) is a pillar, and undermines international security.

Faced with this threat, the United Nations Security Council has adopted several resolutions aimed at stopping these illegal programmes and bringing Pyongyang to the negotiating table, with measures that limit its resources. The latest resolutions, adopted in 2017, also include economic provisions limiting the quantity of oil that North Korea can import and the amount of coal it can export.

Pyongyang seeks to evade these sanctions by organizing high-seas ship-to-ship transfers; its boats meet foreign vessels to obtain and bring back oil discreetly. France and its allies, including the United States, Japan and the United Kingdom, are committed to the implementation of UN Security Council resolutions and have been contributing to monitoring compliance with these provisions on oil transfers since 2018.

France is committed to the implementation of UN Security Council sanctions

As a permanent member of the UN Security Council, France has a special duty to enforce its decisions. France has therefore decided to occasionally deploy military assets to North-East Asia for this purpose. The aim, in liaison with its partners, is to detect, document and discourage ship-to-ship transfers at sea. The information is collected and then passed on to the UN Panel of Experts on North Korea, helping identify activities contrary to resolutions, encourage the States concerned to take measures against the perpetrators and trigger inquiries by the Panel of Experts that could give rise to sanctions against the vessels concerned or the entities that make these activities possible.

For example, a Falcon 200 operated from Japan in March 2019 to monitor North Korean illegal maritime activities. In April, the Vendémiaire surveillance frigate was deployed to detect and record ship-to-ship transfers carried out off the coast by or for North Korea. These activities, carried out in coordination with our partners, help strengthen interoperability with our allies including the United States, the United Kingdom and Japan, and are a reminder to all that France is a reliable, committed military partner. This commitment is part of a shared desire to contribute to the complete, verifiable and irreversible dismantling of North Korea’s weapons of mass destruction and to work towards peace on the peninsula. 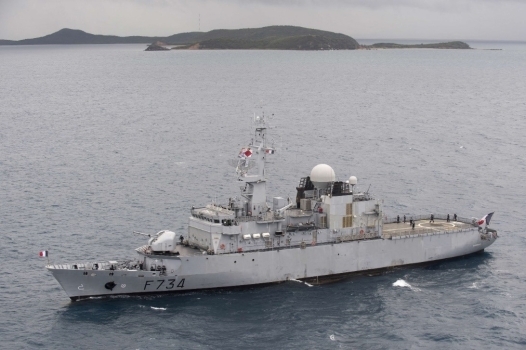 Conclusive results for a structure still being developed

During its flights, the Falcon 200 mission identified some 20 cases of ship-to-ship transfers, some of which may have benefited North Korea. The mere presence of the Vendémiaire surveillance frigate proved to be a deterrent and led to several ship-to-ship transfers being abandoned suddenly. A vessel of interest, the tanker YUK TUNG, was observed on several occasions. This vessel is known for stealing the identity of other ships and using false names. It is suspected of acting as an intermediary in illegal activities for the direct benefit of North Korea. This case, which was directly observed by France, was reported to the UN Panel of Experts, which investigated the ship in its last report.

Other cases, observed by our partners, also show the importance of these missions. In March 2019, the British Navy identified a North Korean oil tanker pretending to be a fishing boat and carrying out ship-to-ship transfers with a ship bearing no flag. In May last year, the same type of activity was observed between a Panama-flagged ship and a North Korean vessel. The Panama ship was reported to the United Nations and the country later withdrew its flag. The ship was banned from ports and could not continue its illegal activities.

Based on these first, very encouraging results, and aware of the importance of the mission, France is already considering further such deployments.