Presentation of the Officer’s insignia in the Order of Arts and Letters to Xavier Dolan, by the Ambassador of France to Canada, Kareen Rispal 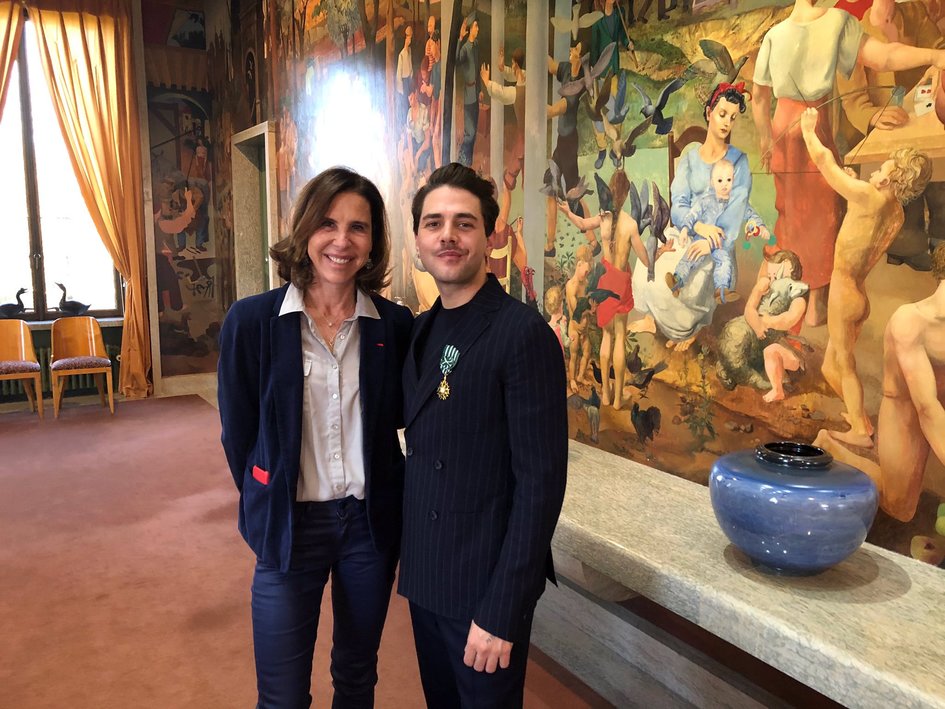 The Ambassador of France to Canada, Ms. Kareen Rispal, presented the insignia of Officer in the Order of Arts and Letters to Canadian director and actor Xavier Dolan on Sunday, November 24, 2019. The ceremony took place at the French Embassy in Ottawa, in the presence of an intimate circle of Mr. Dolan’s guests.

Through the intensity of his films, the powerful nature of his direction and the subjects he addresses, Mr. Dolan contributes to the success of contemporary French-language cinema around the world. Often referred to as a prodigy of Quebec cinema, Mr. Dolan’s talent is undeniable. This appointment by the French Minister of Culture, Mr. Franck Riester, acknowledges Mr. Dolan’s major role in promoting French-language cinema and culture.

"You deal with subjects that touch on difficult and often taboo social realities, but you get scenes of such cinematic intensity that they are now mythical. With your fetish actors, you are a beautiful family and I believe that this special relationship that unites you has a very special chemistry in each of your films," said the Ambassador of France to Canada, Ms. Kareen Rispal, during the tribute paid to the director at the ceremony.

An actor from the age of 4, Xavier Dolan was 20 when he wrote, directed, produced and acted in I killed my mother, his first feature film, selected for the 41st Directors’ Fortnight at the Cannes Film Festival. Then follows Heartbeats, in 2010, Laurence Anyways, in 2012, and Tom at the Farm in 2013, all three of which won awards at various festivals. In 2014, his feature film Mommy received the prestigious Jury Prize at the Cannes Film Festival. In 2016, Xavier Dolan returned to Cannes with It’s Only the End of the World and won the Grand Prix. In 2017, his English-language feature film, The Death and Life of John F. Donovan, was released. Finally, Matthias & Maxime, his last feature film, was in official competition at Cannes in 2019. In the meantime, he also made a name for himself with the production of video clips for the singer Adèle or the group Indochine.

The Ordre des Arts et des Lettres is a French honorary distinction established in 1957. It rewards people who have distinguished themselves by their creations in the fields of culture or by the contribution they have made to the influence of the Arts and Letters in France and in the world. Diane Dufresne, Anne Dorval, Ariane Moffatt, Robert Lepage, Céline Dion, Pierre Lapointe, Jean-Marc Vallée and Denis Villeneuve are among the Canadian recipients of the Order of Arts and Letters.