...Rest assured that beyond the awards that we bestow today, the most essential thing is our duty to remember, which is naturally extended to all those who took part in D-Day operations... Ambassador N. Chapuis 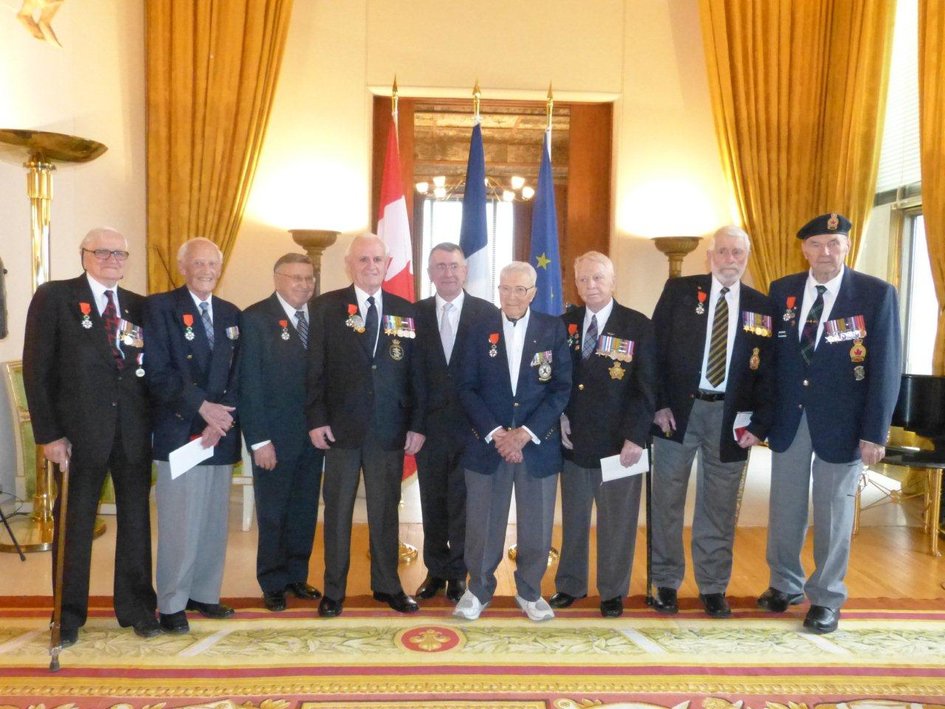 Serving with the Royal Canadian Air Force, Robert James Bradley took part in air support missions for the Normandy Landings from June 10th, 1944, onward. He participated in 30 missions aboard a Lancaster bomber.

John William Byrne, serving with the North Nova Scotia Highlanders, landed in France on June 6th, 1944, at Juno Beach. He was wounded on two occasions: on June 9th, 1944, in Normandy, and on September 19th, 1944, in Boulogne. The severity of these injuries prevented him from continuing on with the campaign for France.

Ivan Alexander Cote, serving with the 409 Fighter Squadron, landed in France in August 1944, in Carpiquet.

As a Typhoon pilot and the commanding officer of No. 247 Squadron RAF, John Friedlander fought in the entire campaign for France. He has a total of 125 missions to his name, including 25 air missions in Normandy. He played a decisive role in the attacks on the German forces in Falaise, Gap, Caen, and Bernay.

Victor Latwoski, serving with the 13th regiment of the Royal Canadian Army, landed in France on June 6th, 1944. He fought in France, Belgium, Holland, and Germany.

John Caldwell McLean, serving with 415 Squadron, took part in air support missions for the landing missions in France. He carried out 13 operational missions in August 1944.

Robert Allan Spencer, serving with the 4th Canadian (Armoured) Division, landed in France on July 26th, 1944, at Juno Beach. He was wounded in Germany on February 28th, 1945.

Speech by the Ambassador

I would like to welcome you to the Embassy of France on this Thursday, April 9th, which is also Vimy Day. The Battle of Vimy, in 1917, was a symbolic battle for Canada because it was the first time in the history of the Confederation that a Canadian contingent fought—successfully—under Canadian command and under the Red Ensign, Canada’s flag at the time. This day marks the birth of the nation of Canada in our collective spirits. In the gallery, you will have certainly noticed the replica of the monument erected in Vimy in 1936. This replica, sculpted by Louis Leygue, is a tribute to the work of Walter Seymour Allward, who designed the monument to honour the 3598 Canadian soldiers who fell at Vimy. It was under this monument, just a few days ago, that we held the fifth edition of the annual Vimy Foundation fundraising reception, which the Embassy actively supports. Tonight, we have come together for a ceremony that is symbolic in three respects: the 70th (almost 71st) anniversary of the landing operations that led to the liberation of France and of Europe from the yoke of Nazi occupation, the 70th anniversary of the end of the Second World War, and Vimy Day.

Almost one year ago, on June 6th, 2014, a ceremony was organized in Ouistreham, France, to mark the 70th anniversary of the Allied Landings in Normandy. This event was attended by a number of heads of state, including Canadian Prime Minister Stephen Harper. The Prime Minister also attended the Canadian ceremony held on Juno Beach, along with the Canadian veterans who were being honoured.

In 2014, in commemoration of the 70th anniversary of the landing operations that led to the liberation of France, it was decided that France would honour 300—a figure that has been since doubled to 650—Canadian veterans who took part in these operations, awarding them the rank of Knight of the National Order of the Legion of Honour, the highest national order in the Republic of France. This campaign could never have taken place without the cooperation of the Canadian government: Veterans Affairs Canada contributed to the identification and verification of the backgrounds of veterans. This campaign is now closed. We did all we could to honour as many veterans as possible: first by extending the submission deadline by one year, then by doubling the number of recipients. We have received many calls and letters from veterans who would like to receive this award. Unfortunately, we cannot follow through on these requests. I hope that they know that my countrymen remember and will continue to remember their dedication. Nous nous souviendrons. Rest assured that beyond the awards that we bestow today, the most essential thing is our duty to remember, which is naturally extended to all those who took part in D-Day operations.

As I mentioned earlier, Vimy is the symbol of the intimate relationship that has united France and Canada for centuries. In 1914–1918 and in 1939–1945, you, Canadians a mari usque ad mare, crossed the dark waters of the Atlantic to fly to the aid of one of Canada’s founding countries, to make the wind of freedom blow once more, and to restore democracy on the European continent. It goes without saying that our two countries, as friends, have throughout history shown mutual respect and support for one another, which befits the shared destiny that unites us and the solidarity that we maintain. There is further proof to be found in both the present day and the recent past: the Canadian armed forces have tirelessly supported the French army with regard to the major issues of security and defense: Libya, Mali, the fight against the threat of ISIS. Our two countries also stand together to face new threats, as was the case in the containment of the Ebola epidemic and in our opposition of disorder in all its forms.

The Legion of Honour was created in 1802 by First Consul Napoleon Bonaparte to recognize exceptional merit in service to the nation. Having read through your respective backgrounds, I have no doubt that you meet the criteria to receive our highest national order. The President of the Republic of France has therefore signed the decrees that signify your nomination to the rank of Knight of the National Order of the Legion of Honour. All throughout 2014, decoration ceremonies were organized across Canada, from the Atlantic Provinces to British Columbia.

I am proud to proceed with this decoration ceremony, which takes place at the Embassy of France as part of this exceptional campaign. Through you, I would like to salute all of the Canadian heroes who served my country.