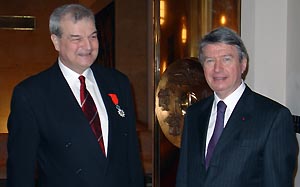 Mr. Perret has been a civil law professor at the University of Ottawa since 1974. He was the dean at the Faculty of civil law between 1994 and 2004. He was previously president of the Canadian Association of law professors, and the Inter American law professors association. In addition to that, he has furthered the exchanges between Canadian and French universities. Finally, he made an important contribution to civil law through the numerous works that he has published or directed on this subject.

In decorating him, France hopes to recognise an unrelenting defender of the civil law tradition and of the dialogue between legal cultures.

Speech of the Ambassador (in French)