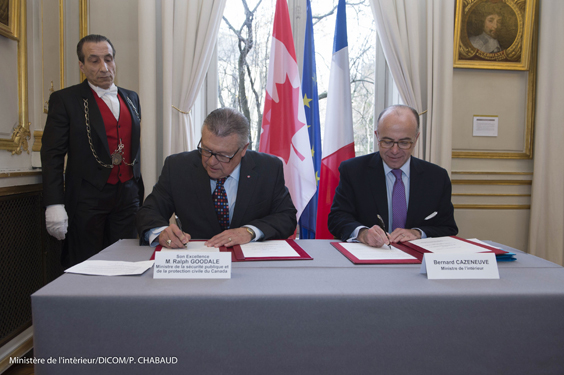 Today, Wednesday, January 13th, 2016, at the Ministry of the Interior in Paris, during the official visit between Mr. Goodale and Mr. Cazeneuve, the Minister of the Interior of the Republic of France] and the Canadian Minister of Public Safety and Emergency Preparedness signed a declaration of intent. This agreement will implement an expanded partnership with regard to national security cooperation, including efforts to combat terrorism and all forms of radicalization and violent extremism; protection for essential infrastructure; efforts to fight transnational criminal activity and illegal immigration; border control; general public safety; public outreach initiatives; preventative measures; civil security and emergency measures; and research and development in the field of national security.