The heads of State and government of over 60 countries are meeting in Bucharest on 28 and 29 September for the eleventh summit of the Organization of La Francophonie (OIF), the international Francophone organization.

For France the key objective is to strengthen the OIF’s political dimension. The Charter approved in 2005 in Antananarivo stresses the organization’s goal of strengthening the rule of law and democracy. The OIF has actively contributed to the move towards democracy in Comoros and the Central African Republic, helped with the organization of the elections in Haiti and sent observers to the recent polls in the Democratic Republic of Congo. 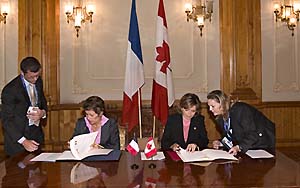 This will also be the opportunity to celebrate the twentieth anniversary of the Francophone summits. The first was in Versailles in 1986. Every two years, these summits, the movement’s dominant political authority, provide a forum for dialogue for the heads of State and government of countries using French as a common language.

The OIF brings together 63 countries on every continent. Nearly 119 million men and women in the world have French as their mother tongue or everyday language, 73 million have a basic knowledge of French and 82 million young people and adults are learning the language, making a total of 264 million people speaking at least some French. While spoken less than Chinese or Hindi, it is, with English, the only language spoken on every continent and the ninth most spoken language in the world. Africa has more French speakers than Europe.

The Francophone community is also very lively culturally: the Year of Francophony, 2006, has been celebrated by many events worldwide, including an international Francophone Day on 20 March. In Paris, the "Francofffonies" festival honoured French-language writers at the Book Fair in March. The final event, on 9 October in France’s National Library, will be a splendid ceremony celebrating the centenary of the birth of Leopold Sédar Senghor, a man of letters and head of State, who was one of the movement’s founding fathers and its symbolic figure. In September in Bucharest, the OIF Secretary-General, Abou Diouf, presented the 2006 Francophone Five Continents Prize to the Mauritian novelist Ananda Devi. At the cultural level, UNESCO’s adoption of the Convention on the Protection and Promotion of the Diversity of Cultural Expressions was also a great achievement for Francophony.