"Citizens of the Earth”

At the instigation of the President of the Republic, a conference for global ecological governance was held in Paris on 2-3 February 2007.

In a spirit of good world ecological citizenship, the Paris Conference brought together government ministers, scientists, company heads, NGOs and public figures from over sixty countries around the world, all personally committed to promoting a vision for the environment and determined to take collective action. 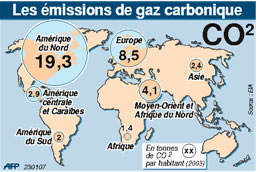 A Committee of Honour, chaired by Mr. Alain Juppé, former French Prime Minister and currently Mayor of Bordeaux, in the company of such prominent members of French society as Mr. Hubert Védrine, former Minister of Foreign Affairs, Mr. Nicolas Hulot, President of the Nicolas Hulot foundation “for nature and humanity”, Mr. Jean Jouzel, climatologist, Mr. Bertrand Collomb, Chairman of the Lafarge Group, Mr. Edgar Morin, philosopher and writer, and Mr. Laurent Stefanini, French ambassador for the environment, officially announced the commencement of preparations for the Conference at a meeting on December 12th at the Élysée Palace to which the President of the Republic attended.

“We all know that uncontrolled human activity is bringing about a sort of slow collective suicide. Disaster can only be averted if nations can come together to support jointly agreed commitments. Let us create a United Nations Environment Organization, the expression of the world’s ecological conscience, with the means to assume this responsibility, the forum in which we take common action for future generations. France will be hosting an international conference next year to bring together all those who want to make progress on this project, which is crucial to the future of the planet”.

Extract from the speech of the President of the Republic to the United Nations General Assembly in New York on September 19th 2006.

The goal of the Paris Conference was to mobilise international efforts to achieve three objectives:

To raise awareness of the urgency of the situation, taking stock together of the threats facing the environment and endangering the broad ecological balances of our planet.

To decide upon priority measures to combat those threats in order to respond to the global ecological issues for our time and for generations to come.

To take action, at international level, to create a United Nations Environment Organization (UNEO) with a view to strengthening environmental governance.

"Citizens of the Earth” : The Paris Conference for Global Ecological Governance