Chopin at the French Embassy

... Fostering and supporting artistic connections between Canada and France is also very important to us. This is especially true here in Ottawa, where classical music is closely followed by an audience of true connoisseurs... Read

Piano virtuoso Dang Thai Son was propelled to the forefront of the musical world in October 1980, when he was awarded the First Prize and Gold Medal at the tenth International Chopin Piano Competition in Warsaw. It was also the first time that a top international competition was won by an Asian pianist. Discovered by the Russian pianist Isaac Katz during his visit to Vietnam in 1974, Son pursued his advanced training at the Moscow State Tchaikovsky Conservatory in Russia with Vladimir Natanson and Dmitry Bashkirov. Since winning the Chopin Competition, his international career has taken him to over forty countries, into such world-renowned halls as Lincoln Center (New York), Barbican Center (London), Salle Pleyel (Paris), Herculessaal (Munich), Musikverein (Vienna), Concertgebouw (Amsterdam), Opera House (Sydney), and Suntory Hall (Tokyo). He has played with numerous world-class orchestras.

The evening of Friday, June 3, 2011 started with a reception in the grand salon of the beautiful French Embassy. Then, guests took their seats in the second floor reception hall, specially reconfigured for the event, to enjoy an hour-long concert with Mr. Son, Maestro Mallon and the Thirteen Strings Chamber Orchestra. The evening ends back in the grand salon, with a post-concert cocktail reception. 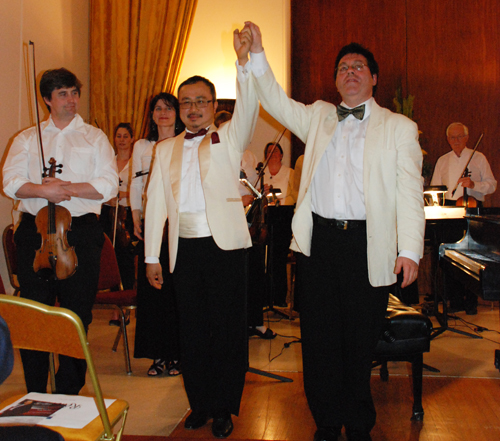