70th Anniversary of the Dieppe Raid in France [fr]

For seventy years, on each 19 August, Dieppe remembers that tragic morning when more than 1,200 young men, most of them Canadian, died on these beaches in an operation to prepare for the liberation of France. 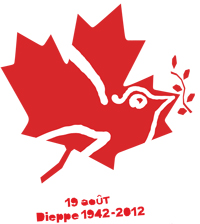 « On August 19th, 1942, Dieppe, Canada and Britain had a new date with history. A bloody date which reinforced the very strong ties between these two nations and our city. »

On August 18th, 19th, and 20th, there will be ceremonies organized in memory of the 913 soldiers who fell during this assault on the beaches of the Dieppe region.

A schedule of activities will accompany the ceremonies throughout the summer.

A free concert by Natasha St Pier is also planned for August 15th.

Prime Minister Stephen Harper today issued the following statement to mark the 70th anniversary of the Battle of Dieppe:

Tomorrow, we remember one of the darkest chapters in the Second World War – the Dieppe Raid.

A pivotal moment in the Second World War, the Dieppe Raid occurred at a time when virtually all of Europe was under German occupation. The Raid offered important lessons that would assist Allies during the D-Day invasion two years later, saving countless lives.

The raid on Dieppe was a devastating moment in the history of the Canadian Armed Forces. Of the nearly 5,000 brave Canadians who participated, less than half returned, many of whom were wounded. More than 1,900 of our finest were taken as prisoners of war and 913 made the ultimate sacrifice.

As we mark this anniversary, we say thanks to the thousands of selfless Canadians who fought for our country on this solemn occasion. We also thank current members of the Canadian Armed Forces who continue to serve with great pride and distinction, upholding our most cherished values of freedom, democracy, human rights and the rule of law around the world.

A series of commemorative ceremonies, including those at Canada Memorial Square, and the Pourville Memorial in France, the National War Memorial in Ottawa and in various communities across the country, will mark this important event in Canadian military history.

Speeches by the Governor General

Ceremony at the Pourville Memorial

Reception Hosted by the City of Dieppe

Commemoration of Dieppe Raid in Ottawa

Archives (pdf) from the Office national des Anciens et Victimes de Guerre, with the participation of the Centre Juno Beach.