During the 24th edition of the Entretiens Jacques Cartier, which traditionally alternate between Montreal and Quebec City and France, two conferences were held for the first time in Ottawa, hosted by the University of Ottawa with the support of the Embassy of France: a conference on catalysis and another on synthetic biology.

H.E. Mr. Philippe Zeller, the Ambassador of France to Canada, expressed the desire to bring together experts in science and academia from the Entretiens Jacques Cartier for a reception at the Embassy on Friday, September 30.

This reception was also a chance for the University of Ottawa, represented by Professor Mona NEMER, Vice-President, Research, and the president of the France Canada Research Fund, to sign a cooperation agreement with the Ecole Nationale supérieure de Lyon, represented by its president, Professor Jacques SAMARUT, with the goal of developing a joint training and research space. 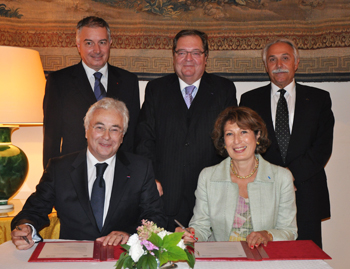