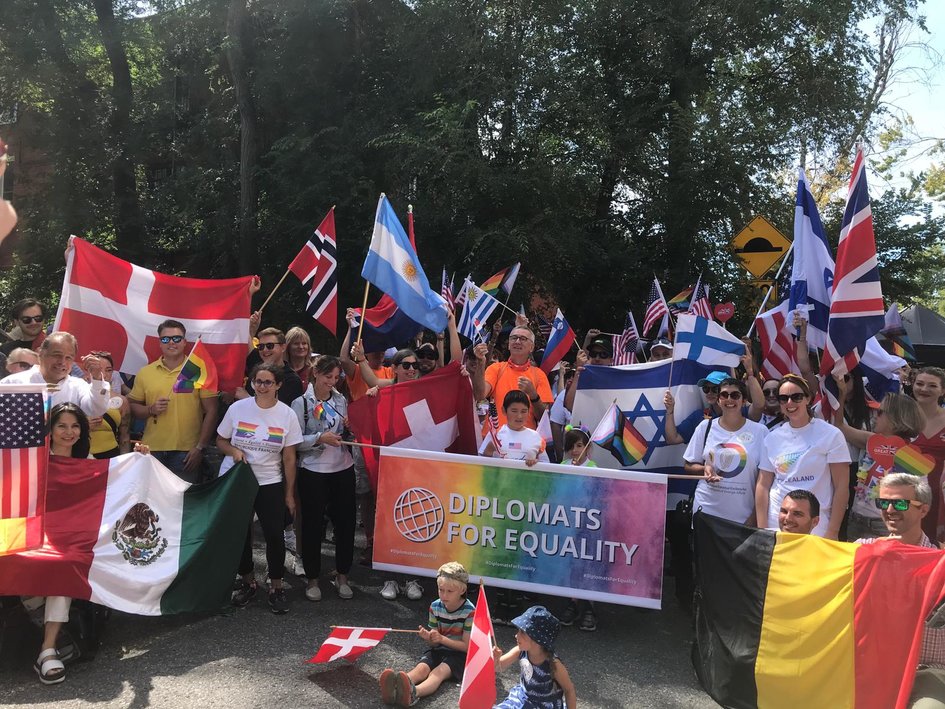 We, Canada and the diplomatic missions of Australia, Belgium, Denmark, Finland, France, Germany, Iceland, Ireland, Israel, Mexico, the Netherlands, New Zealand, Norway, Slovenia, Sweden, Switzerland, the United Kingdom, and the United States, proudly support the 2022 Capital Pride Festival, as a celebration of diversity and inclusion around the world.

After a challenging two years of the pandemic, we fully endorse this year’s Capital Pride theme “All Together Now” and invite everyone to reconnect and celebrate the full diversity of the 2SLGBTQ+ community. As such, we are committed to the principle of non-discrimination on any grounds, including sexual orientation, gender identity or expression, and sex characteristics.

Everyone, everywhere, should be free to express themselves and love whom they love, without fear of harassment, violence, discrimination, or reprisal.

The COVID-19 pandemic exacerbated the vulnerable situation of 2SLGBTQ+ persons, particularly when it comes to mental health and economic stability. It exposed existing gaps of equality, including bias and social stigma, discrimination, economic disparity, and the risk of violence. The physical toll was particularly tangible on 2SLGBTQ+ youth, who even prior to the pandemic, were at significantly increased risk for depression, anxiety, and suicide.

As new monkeypox cases have been reported across the globe, we reiterate that the health and safety of all remain our priority. We are committed to fighting stigma and discrimination which – as the WHO Director General stated – can be as dangerous as any virus.

2SLGBTQ+ persons disproportionately suffer from violence and discrimination during armed conflicts. We reiterate our condemnation of Russia’s military aggression against Ukraine and the indiscriminate attacks against civilians. We are gravely concerned by the particular and severe negative impact on persons in vulnerable situations, including 2SLGBTQ+ persons.

Around the globe, 2SLGBTQ+ persons continue to suffer from violence, discrimination, and bullying, often with deadly consequences. In 70 jurisdictions, consensual same sex relations are still criminalized and, in 11 of them, may be punished with the death penalty. We remain alarmed at these severely inhumane measures. Nobody should face discrimination and violence, let alone death because of who they are or whom they love. We all benefit from living in more tolerant and inclusive societies. Consequently, we support efforts aimed at decriminalizing same sex relations and persons based on sexual orientation or gender identity.

Similarly, we remain fully committed to promoting, protecting, and implementing the rights of 2SLGBTQ+ persons, who must be accorded the same dignity, respect, and rights as all other persons. We acknowledge the exacerbating impacts of intersectionality for 2SLGBTQ+ persons who also identify as other marginalized groups, and recognize the value of diversity and empowering those who identify as two-spirited, lesbian, gay, bisexual, transgender, intersex, non-binary, or queer. We will continue to work through our Foreign Missions and through international organizations to promote tolerance and non-discrimination against 2SLGBTQ+ persons.

We also wish to pay homage to the courageous efforts carried out by human rights defenders, activists, journalists, media workers, civil society organizations and companies, including those that identify as 2SLGBTQ+, to raise awareness about the issues facing 2SLGBTQ+ persons and ways to address them positively.

Finally, we will continue to shed light on these and other injustices and to advocate for everyone, regardless of sexual orientation, gender identity, gender expression, and sex characteristics. We hope that you will join our efforts, during the 2022 Capital Pride celebration and throughout the year, to make Ottawa’s diplomatic community a more inclusive one for all. We stand united in celebrating diversity and the resilience of the 2SLGBTQ+ community and in defending human rights, inclusiveness, and justice.